The company has always been a family-owned and ffamily-run company, founded in 1899 by Carl Miele and Reinhard Zinkann. Of the current board of Directors, 4 out of 5 have doctorate degrees, which is tellingly German and typifies their engineering background and helps them deliver on Miele’s slogan, “Immer Besser”, German for “Always Better”.

Products
Miele produces domestic ovens, steam cookers, refrigeration products, coffee makers, dishwashers, laundry-care appliances and vacuum cleaners. This line-up is augmented by dishwashers, washer-extractors and tumble dryers for commercial use as well as washer-disinfectors for use in medical and laboratory applications through Miele Professional.

Production
The production of Miele products is spread over 8 German factories, 1 in each of Austria, China the Czech Republic and Romania. They employ over 16,500 people and have annual revenues of some €3bn. Sales and Service centres are based in the German cities of Hamburg, Frankfurt and Munich and they have sales subsidiaries in 47 countries, plus importers in 50 more countries.

Awards
Miele was presented with an award in Munich on February 7, for being the most successful company in Germany in 2007. In the Best Company category, Miele beat last year’s winner Google, which placed second, and also Porsche, which came in third.

Miele was honored as Best Domestic Appliance Brand in the UK by Which? in 2007 and again in 2008, being only one of two brands to win twice in a row which certainly solidifies their position as a truly uber kitchen appliance manufacturer. They won again in 2010.  In North America, Miele is marketed as a high-end major appliance brand and they compete against brands such as Viking Range, AEG and Kuppersbusch and interestingly the late Steve Jobs was the owner of a Miele washing machine, and publicly praised the firm’s design philosophy.

For more info on the German kitchen appliance manufacturer the Miele website is at www.miele.co.uk 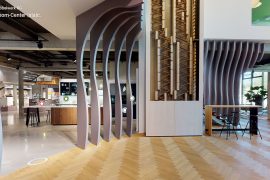