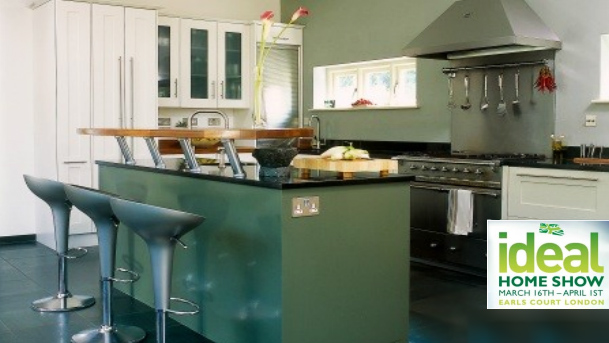 Anthony and Tony Mullan pride themselves on producing bespoke kitchens and bedroom without the high-street prices. They manufacture and retail from their Maidenhead base and have stores in Windsor and Virginia Water.

Anthony Mullan has been making kitchens all his life but he still gets a buzz out of it. “Every day is different,” he says, “and there is always a new challenge.”

Bespoke furniture-making is in his blood. He started out at the age of 17 in Belfast and moved over to the mainland in 1985 to work for another kitchen manufacturer. By the time he hit 40, having helped to build up the company he was working for to the same stage his own company is at now, he found himself questioning whether he wanted to carry on working for someone else or go it alone.

And so it was then in 2000, Anthony set himself up in premises not far from his current location with a total workforce of five, including his son Tony.

Now Anthony Mullan Furniture turns over some £2.1 million a year, has a 3,000 square foot factory and showroom in an industrial unit on a farm just outside Maidenhead, with a high-street showroom in Virginia Water and a showroom in Daniels department store in Windsor. Now he employs a total of 20 people and a part-time marketing consultant.

Anthony confides: “My background was always in bespoke joinery. It was easy for me, as I’ve been doing that all my life, but the selling side was harder. I’d never really dealt with customers face to face before.” So, son Tony now takes care of the sales and design side.

Tony explains that far from being a disadvantage, the out-of-the-way location is a major plus point. There is plenty of parking space and when families come to visit, the kids can amuse themselves looking at the horses on the farm. And it means the overheads are much lower.

Bespoke
Anthony Mullan Furniture prides itself on producing totally bespoke kitchens, but has always been quick to point out in its advertising that it offers bespoke quality without the high-street prices. And its low overheads help to make that possible.

“There are no set sizes or off-the-shelf designs here,” says Tony. “Our kitchens are totally bespoke. When people come in and say ‘that is what I want, can you make it?’ the answer is always yes. Any size, any shape, any colour. This lets us concentrate on the design as we don’t have to think about trying to fit in a couple of 600mm units when we can make two 533mm units that fit exactly.”

Its typical customer is a senior executive with 2.4 children and the average spend is between £23,000 and £27,000. The company handles on average around 10 kitchen projects a month.

The showroom in the Daniels department store opened in 2007 after they did a kitchen for one of the Daniels family. He was very pleased with the kitchen and so Anthony approached him with the idea of a showroom in the store, to which he agreed. The traditional, long-established department store offered just the right sort of affluent clientele for Anthony Mullan’s bespoke products.

Then, just after the credit crunch hit in 2008, the company decided that expansion was the best way to go forward and opened its high-street store in Virginia Water in 2009. The three stores contribute in equal measure to total turnover, although Tony admits that it takes more investment to get customers into the Maidenhead store. He spends around £5,000 a month on advertising in local newspapers and has recently revamped the website and taken on a marketing consultant to ensure that they don’t miss.

Manufacturing its own kitchens gives Anthony Mullan Furniture a big edge over many of its competitors. Anthony says: “It certainly gives us more control over our margins and it means that we buy them in at cost. Making our kitchens here gives us a tremendous advantage. We have customers who come and see their kitchen being made. People love that. And we can make anything – there’s nothing we can’t make. If you go into some of our competitors, such as John Lewis or KCA, they have to work to the guidelines of the companies they deal with. Our kitchens are totally bespoke.”

As a bespoke retailer and manufacturer, quality of service is a top priority. Anthony and Tony employ their own full-time team of three installers. They know his products and they are experienced in fitting them. Occasionally, Anthony explains, especially if customers are having building work done, they will try to save money by getting their builders to fit the kitchen for them. It is a practice he actively discourages as he has had too many customers on the phone in tears as their builders have ruined their new kitchen, leaving him to put it right. a trick when it comes to promoting the business.

When money is tight, this is one way he says that people may try to save money. Has the recession had an adverse affect on business?

“Up until a year ago, it hadn’t,” says Anthony. “This year has been up and down. One month will be good and the next bad. People are holding on to their money and they’re looking for better deals. We do get asked to match prices, but we’re very good at pointing out the differences with our products. And although we are a bespoke company, we are competitive with our prices.

“Having the workshop on site helps us be competitive. There aren’t many around like us in the South-East who make their own furniture. A lot of bespoke companies have to ship products down from the North and that can take a couple of days. So they are badly hit by delivery costs and time delays. And if it’s wrong when it’s delivered, it takes longer to sort it out.

“With us,” he adds, “if there is ever a case when something doesn’t fit, we’re in a better position to sort it quickly. We don’t have to wait for a delivery from Germany or wherever. It’s one of our big selling points. We’ll put it right the next day.”

Asked about bedrooms, Tony explains that the business is 80% kitchens and then the remaining 20% is split between bedrooms, office furniture, libraries, media units and one-off items of furniture, such as tables.

Being able to design and make furniture where any strange angles or curves can easily be accommodated is a big plus point for bedrooms, he says. Bedroom sales are often add-ons to kitchens, and on some occasions, they have gone on to do a whole house for a client, the biggest so far totalling £127,000.

Tony explains that they also work with smaller property developers, where there are three or four bigger houses on a plot and they want a quality kitchen as it helps sell the house.

Comparisons
I ask Anthony whether he feels his products are in any way lacking compared with more expensive bespoke kitchens from the likes of Mark Wilkinson.

“Definitely not,” he says. “I had a couple of customers who had Mark Wilkinson kitchens that I did bedrooms for, who have moved and then asked me to their next kitchens.”

Are there are trends they have noticed in the style of kitchen people are going for right now?

“Not really,” says Anthony. “It depends on the house. Some designs are timeless. I’ve been selling shaker kitchens for the past 25 years and I’ll be selling them for the next 25. It’s neither traditional nor contemporary and if you choose a different colour or handle style, it’ll look completely different.”

I ask if there is anyone in the business that they admire? Tony says: “I think the likes of Martin Moore are very good. They tend to stick to ‘ranges’ whereas we can be more flexible. Then there’s Mark Wilkinson, of course. The others, in my opinion, tend to be a bit the same.”

Given the nature of the business, Anthony Mullan does not tend to suffer from competition from the internet, although Tony admits that it can happen with appliances. He deals mainly with Neff and Miele, supplemented by Britannia, Bosch, Siemens and Sub Zero Wolf. He says that when a customer finds a cheaper price online, suppliers such as Miele normally agree to match it.

He adds that they are pretty happy with the level of support they get from suppliers and have held open days and cooking evenings with Neff and are planning some with Miele for later in 2012.

Are there plans to expand or diversify? Anthony says that they will be sticking with what they do best. “You never know what will happen in the future, but for now we will just consolidate what we have.”

Tony points out that they have already expanded in a recession with the opening of the Virginia Water store in 2009. He does add that they are very excited about having a stand at the Ideal Home Show this year. “That’s a big thing for us and we’re getting some sponsorship from Neff.”

So it seems Anthony Mullan Furniture will not be resting entirely on its laurels and is actively pursuing new avenues to help increase business in what may well remain a difficult economic climate.

Kbbreview has been the leading business magazine for the kitchens, bedrooms and bathrooms sector for over 25 years. Written for the independent retailer, it is also read by manufacturers, distributors, suppliers, architects and designers.

It focuses on news, features, advice, profiles and products and is the key source of information within this exciting and wide industry. It is not available on the shops, but you can get it delivered to your door every month.