Kutchenhaus, a franchise of German kitchen manufacturer Nobilia, will open a new showroom in Ambassador House Crane street, Chichester on September 16th by award-winning designers Andy Barwell and Paul Turner whom are understood to have bought the franchise.

According to the local paper, the Chichester Observer Andy, who is also an ambassador for charity Muscular Dystrophy UK, said the company could offer designs suitable for those with back or knee problems or wheelchair users. 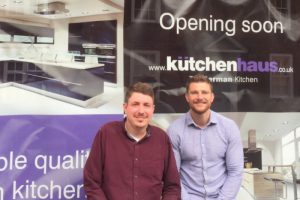 Kutchenhaus was established in 2004 at Trafford Retail Park, Manchester and then it developed 3 more flagship showrooms at Sutton Coldfield, York and Brentwood before expanding its franchise model which has seen a Bristol showroom and others in Aberdeenshire, Beverley, Chichester as detailed here, Exeter, Farnborough, High Wycombe, Liverpool, two in London, one in Tunbridge Wells and according to the business future showrooms are coming soon to Aberdeen, Cardiff, Linlithgow, Orpington and Sheffield.