According to recent KBB news Blum, the components manufacturer has reached its target of getting 200 ‘landmark’ retailers involved in its Space Tower drive across the UK.

Blum considered these ‘Landmark’ retailers as ones that have a fully  merchandised Space Tower demonstration in their showrooms.

Blum reached its retailer target in December 2017 and Blum UK marketing and communications coordinator Lisa Robinson said: “Signing up 200 landmark retailers has been a fantastic achievement for Blum UK, we are proud of our product and what it could mean for retailers and consumers. Over the course of 2018, we want to build on this 200 and get the Space Tower message out there as much as we can, while also providing additional support services for all those that have already signed up.” 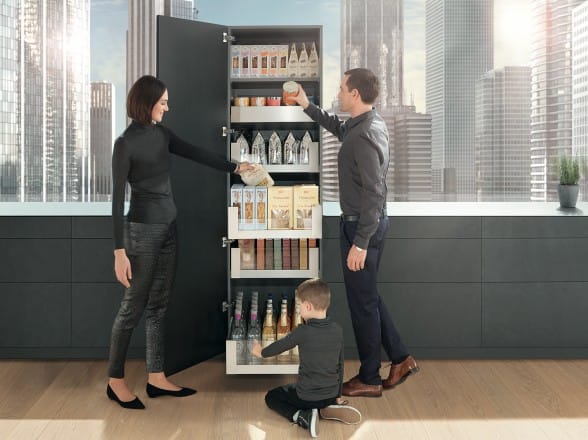 What is the Blum Space Tower?

Sorry folks but unlike the name may suggest to some the Blum tower is not the latest addition to the International Space Station but a kitchen larder solution that offers more  ‘space’ in the sense of storage capacity in your larder unit compared to more traditional units.

As a matter of fact Blum claim that the Space Tower can increase storage by up to 55%, compared with a traditional door and fixed shelf unit.

If you want a larder unit that offers plenty of storage space, whose inner pull-outs can be designed individually and that gives you easy access to items from all three sides, then you’ll like Blum Space Tower. This is the convenient and ergonomic way to store food. 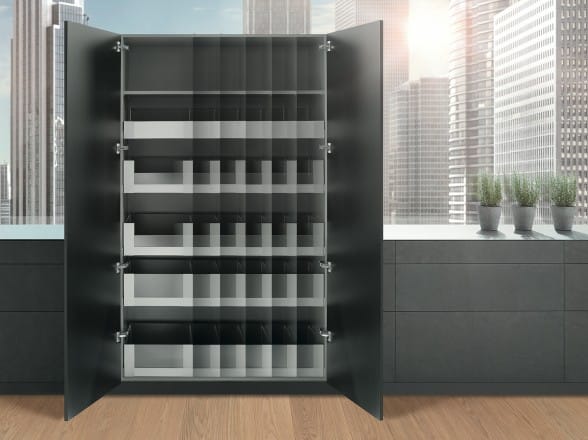 The Blum Space Tower has full extensions that give you clear visibility and easy access to your food stuffs and other provisions from all three sides (left, right and even the front) and crucial to the concept the larder unit comes in all heights, widths and depths and can be tailored to your individual storage space needs. 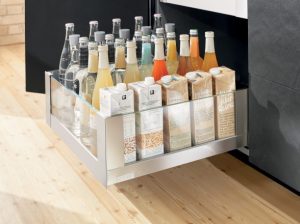 With each pullout there is an impressive load bearing capacity (up to a total weight of 70 kg) so the larder unit can even safely hold heavy items such as a full case of wine and some bottles of beer with ease, or for those still in ‘Dry January’ it can still hold a full case of wine and other bottles of alcohol to be opened in a few days time, not that we are counting…