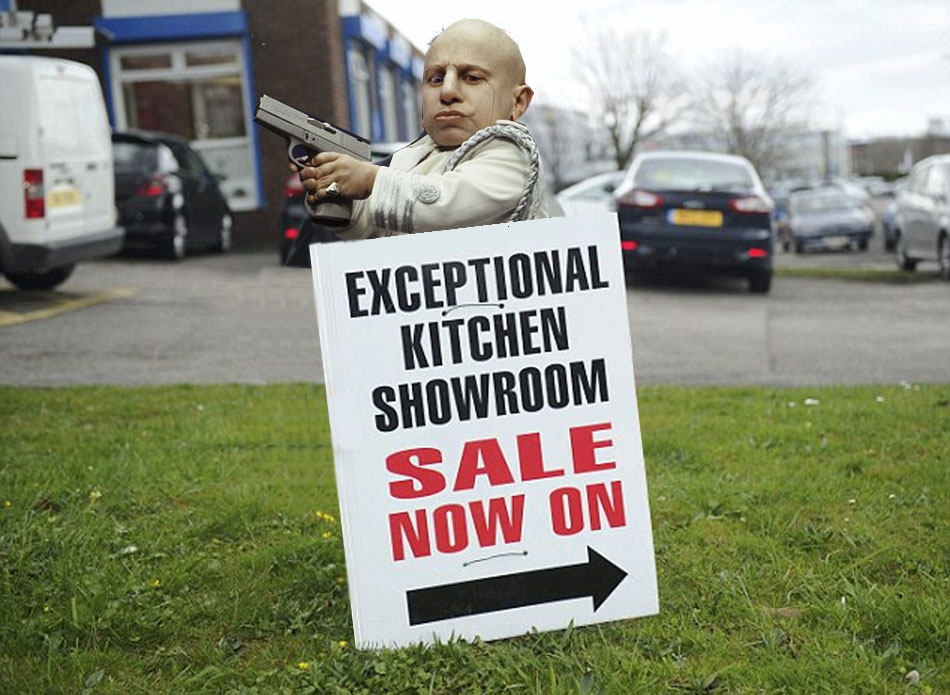 A businessman in the kitchen industry has been ordered to take down signs he put up at weekends because they ‘contributed to a fear of crime’.

Jordan Green, 25, posted temporary signs on a grass verge outside his showroom on a trading estate in a bid to attract extra customers.

But council investigators said there was a risk that criminals could use the plastic signs – some as small as two foot by three foot – to hide behind. Flyposter: Jordan Green, 25, was fined £4,000 for putting up this sign to advertise his kitchen sales business Designer Kitchen Furniture.

‘Fear of crime’: Mr Green says he put the signs up to pick up passing trade on a grass verge near his showroom in Stockport

Liberal Democrat Councillor Kevin Hogg said they had received complaints from the public who were worried that: ‘Someone could hide behind the signs and jump out at them.’

Mr Green was brought before magistrates in Stockport, Manchester, where he admitted ten charges of illegal advertising on the highway and was fined £4,000.

His signs said ‘Exceptional kitchen showroom sale now on’ and had an arrow pointing to his business. Council sources said they seized more than 200 signs which had been put up to advertise the business – some as large as 5ft by 4ft.

They added that Mr Green had repeatedly been warned to stop putting the signs up, but had ignored it.

Mr Green, who runs Lincoln Jordan Interiors in the Heaton Norris area in the town said: ‘This case is a joke. I can’t believe these signs would suddenly cause yobs to go round stabbing people – all they’re doing is advertising kitchen units.

‘No one bothers with them apart from the council. It is a piece of corex which is soft and bendy.

‘I personally do not think it is flyposting, we go out and put these signs in the ground and hammer them and then remove them, flyposting is where you attach to street furniture permanently. We don’t do that.

‘No one has ever complained to us saying we made the area unattractive. I’m not saying the signs are beautiful but I am not putting them in an area of conservation or local beauty. Businessman: Mr Green said that his company relies on the signs, left outside at the weekends, to pull in passing trade

‘It is an area of grass where weeds are growing. They are not a nuisance because they stay in the same place. Other businesses do the same thing but they are left alone as they are big companies. I’m a little guy trying to earn a living. The council should help the small to medium businesses not hinder them.’

Mr Green started his company in October 2010 and has advertised his business in local newspapers, but the trouble began after his signs were hammered into the grass outside his shop for five hours on a Saturday and Sunday.

Within weeks he was sent a warning letter by the council which he ignored.

The businessman added: ‘The council officials were sitting there waiting for us to put them out. Even on Easter Sunday they didn’t have anything better to do and they were sat outside my shop watching.

‘It’s frustrating, in my opinion they are jobsworths. it’s okay for them they have got a job where they are paid 52 weeks of the year. Fine mess: The businessman was ordered to pay £4,000 after admitting ten charges of illegal advertising on the highway Fine anger: Mr Green said: ‘80% of my business comes from these signs, I am a means to keeping people in work’

‘In court I felt like a criminal. All I do is sell kitchens. At the end day I’m an employer of 10 staff and if my company does go under that will mean 10 more people on the dole.

‘The signs were a big part of the business but there’s no way I can get in that amount of money if I don’t have the signs, which in turn means I can’t pay wages.’

He added: ‘80% of my business comes from these signs, I am a means to keeping people in work.

‘The signs attracted people’s attention and got people coming into the shop. Stockport Council is not supporting local business, my manufacturing business is everything the council and the Government are meant to be supporting, we don’t buy anything in we make everything.’

‘I don’t make millions, I’m not driving a Ferrari and I don’t have a mansion and a place in Spain. I’m just a lad trying to run a business and earn a living and provide jobs.’

Liberal Democrat Councillor Kevin Hogg executive member for public realm at Stockport Council said:  ‘The reaction from the public is that it makes them more fearful of crime – they are worried that people can hide behind the signs.

‘Mr Green was warned on several occasions about putting these signs up.

‘When you get two or three of them they are a distraction for drivers. They take their eyes off the road to look at them.’

He added: ‘We are determined to make the borough an attractive place to work visit and live are committed to stop illegal flyposting and graffiti.

‘Flyposting is a form of unauthorised advertising which degrades the environment and can contribute to the fear of crime in a community. Items left in the road are a potential hazard for road users and pedestrians.

‘We tackle repeated flyposting with an initial warning to businesses and individuals. When these requests are continually ignored we will consider prosecuting.’

The above news was reported on the DailyMail. The photos are the property of Cavendish Press cavendish-press.co.uk
Kitchens Kitchens Editor Jeff Russell :

Personally I know that area of Stockport, Manchester and that the B&Q that’s there does exactly the same thing, as do the car garages that are on that business estate so it’s a little unfair that Jordan Green is being penalised, hence the positive reaction in terms of the comments to that article.But, the council doesn’t do themselves any favours in trying to put spin on their motives to remove the signs in suggesting they could be “used by criminals to hide behind”????Aside from murderous dwarves, Mini Me, Hobbits and perhaps Ewoks as one DailyMail comment suggests as being the only people capable of hiding behind such small signs, I see Stockport Council’s claims being as much fiction as films like the Lord of the Rings.

Pressure on white-goods manufacturers to ease up on sme retailers