Whilst the housing market is in a continued state of flux and the big woolly mammoth house builders are suffering, it’s the smaller niche developers that are bucking the trend, going against the tide of mediocrity and making homes that people (granted those with a bit more budget that a 2 bed Barratt estate house) are actually are snapping up.

Rather than new build housing estates or box flats, niche developers are opting for more traditional type homes like old school buildings, Victorian manors and the like and instead of cramming in as many units as possible, they are really embracing the high ceilings and potential to make great open plan living spaces and instead of doing what the Buy-To-let market does which is cheap as chips conversions, cheap as chips kitchens and bathrooms its really encouraging to see more and more high end homes being built and it’s the kitchen brands of Nobilia and Hacker that are being used more and more.

I was at a house warming two weeks ago and true to the article the property was about 20 apartment conversions from an old Victorian school building in Cheshire which has been very tastefully converted and that the property is sat in about 20 acres of woodland only adds to the ambience as you drive up the sprawling winding drive as if you were staying at some plush country retreat.

The modern living space was open plan and true to modern contemporary styling offered a lounge, kitchen and dinning space all in one large floor space, which had a slight partition for the kitchen to keep the ovens and dishwashers out of view from the living space.

True to form the kitchen was the German kitchen of Nobilia no less, and apparently bought from Kutchenhaus in Chester, which has since closed.

But with the Nobilia brand being served in Cheshire and Chester by German Kitchens Uber (showrooms Warrington, Chester / Cheshire Oaks and Bramhall in Manchester) it would be surprising now that the developer of that particular site, whom has had such a rave reception, that they wont stay true to form and use the Nobilia brand once more in future developments.

Other Nobilia kitchens being used in new developments as per the Nobilia GB case studies from Nobilia have been seen from Redcliffe Homes in Sherbourne, David Wilson Homes in Greenfields, St Oswald’s Court, in Malpas, the there is the Linden homes development in Sandy Lane, Teddington, The Dutch Gable, Manor Road, West Ealing, London and many many more.

No disrespect to B&Q and IKEA but having a choice between theirs and a Nobilia kitchen is a no brainer. They don’t compete on price, quality or anything else for that matter and its like saying would you like a second hand 4 year old Ford Fiesta or a brand new BMW 3 series? Both do the job they were designed for but whilst one is merely functional, the other delivers the ultimate driving machine and its the same when comparing German kitchens to the likes of B&Q. 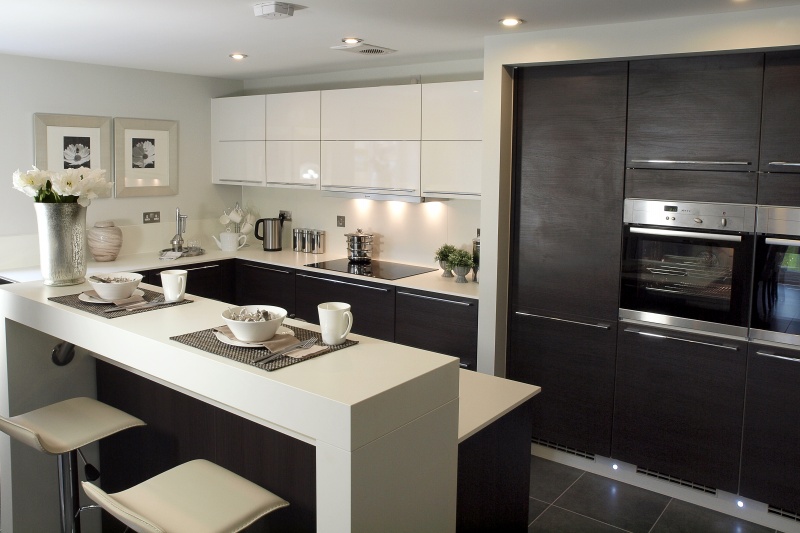 The above image is for Bloor Homes at 131 Holloway, Droitwich (WR9) Worcestershire, UKwhere Bloor are selling new homes above the £250k and as you can see the Nobilia kitchen delivered by nobilia GB, worked closely with Bloor to understand their needs and target the right customer for their new homes at Holloway. Units supplied : 7