We are down to the Top 12 on Hell’s Kitchen and this is where it is going to get heated! These chefs are all out to win it and try to prove their worth and with uneven teams, will we see another switch tonight between the Red and Blue Team?

by Todd Betzold of realitywanted.com

Patrick tells Clemenza that he is glad he is here, but then tells the camera that he will get rid of Clemenza still…cute. Next morning and the chefs meet Chef Ramsay for the next challenge. For this challenge, each team has four domes with food inside of it. He’ll start with the first dome and there will be six proteins for the chefs to choose from. Every five minutes, Chef Ramsay will ring a bell and the next dome will become available with six more ingredients. They will choose the ingredient that fits best with their protein and they must use all the ingredients they get in their dish.

Chef Ramsay starts with the proteins and then the bell rings and the next ingredient is a starch. The Blue Team seems to be working together on distributing the ingredients, but the Red Team is fighting for each and every ingredient, even though they are judged as a whole. The other ingredients are handed out and the 30 minutes is up and time for the dishes to be judged. Joining Chef Ramsay to judge tonight are Chef Anita Lo, Chef Douglas Keane and Chef Michael Cimarusti. Each dish is awarded between 1-3 stars.

For winning, the Red Team is heading for a relaxing day at the spa. While the ladies are relaxing, the Blue Team is prepping both kitchens for the dinner service that night and they will also be cleaning the dorms where everyone sleeps, which I’m sure are quite nasty because these people look disgusting. In addition to the spa, the Red Team has a surprise upstairs for them. They run up to get it and it is a set of cookware…very nice. The Red Team still argues at the spa, as Barbie doesn’t want to get in the same water as anyone else and swap fluids with them…oh Barbie!

Now time for prep for dinner service and Robyn asks Barbie a question, which Barbie doesn’t answer. The drama starts before dinner service even begins. Chef Ramsay calls the chefs together and tells them that he has invited some very special people to sit at the chef’s table inside the kitchen during service. The Blue Team will have former UFC champion Tito Ortiz and the Red Team will have boxing legend Sugar Ray Leonard. Robyn and Justin will serve the special guests.

Hell’s Kitchen is officially open and they start putting up some appetizers. Clemenza sends up chewy pasta for the spaghetti, so they are behind on apps. Christina sends up risotto for the Red Team and Chef Ramsay said it tastes delicious. Chef Ramsay is still waiting on Clemenza for spaghetti and he sends up good spaghetti and apps start going out for the Blue Team. Meanwhile, Tito and Sugar Ray arrive and Robyn and Justin wait on them.

Christina then sends up undercooked risotto, which Chef Ramsay calls her out on. Brian then sends up risotto for the Blue Team and it is soupy and gets sent back. Both the VIP guests food is screwed up. Christina tries again at the risotto and she seasoned it perfectly and they start knocking out their tickets and have served half of their apps to the dining room. Brian tries again on the risotto and it is perfect.

The Red Team has moved on to entrees and Tiffany sticks a knife in on her lip and then in the Beef Wellington, so Chef Ramsay calls her out. Roshni sends up raw Beef Wellington for the Blue Team, so the beef is getting to the chefs tonight! Roshni and Clemenza start over on the beef as Robyn decides she will start babbling on and on to Sugar Ray and his wife, which they seem annoyed by her.

Another attempt for Tiffany on the beef and she sends it up raw again. Roshni and Clemenza are working on the beef and she brings it up. Patrick then sends up cold lobster, so they are failing big time on the entrees. Dana sends up Beef Wellington and it is perfect, so entrees start leaving the Red Team’s kitchen. The Blue Team attempts the entrees again and sends up cold lobster again. Chef Ramsay is over it and he kicks all of the Blue Team out of the kitchen.

Chef Ramsay calls the Blue Team back and tells them they sucked tonight and they must nominate two people to go home. Patrick, of course nominates Clemenza and Brian. Brian nominates Patrick and Roshni and Clemenza agrees. They go in front of Chef Ramsay and announce the nominees, which are Brian (apparently because the first ticket slowed them down) and Clemenza, which baffles Chef Ramsay and he asks if they take this seriously. He said they do not deserve to be nominated and he nominates Roshni and Patrick, both familiar with the bottom two. They defend themselves and Chef Ramsay asks who he should send home and then chefs are leaning towards Roshni. Chef Ramsay agrees and Roshni is sent home and Patrick is safe.

Hell’s Kitchen airs on Mondays and Tuesdays at 8/7c on FOX.

Premiere chef Gordon Ramsay spices up the tenth season of Hell’s Kitchen with 18 new competitors. These aspiring restaurateurs will brave Ramsay and his fiery command of the kitchen as he once again puts the competitors through an intense culinary academy to prove they possess the right combination of ingredients to win the life-changing grand prize: a head chef position at Gordon Ramsay Steak in the Paris Hotel, Las Vegas, NV.

As the competition progresses, the teams will be reduced until only two chefs are left to compete for the ultimate prize and fulfill their dreams of working in the culinary industry as the winner of Hell’s Kitchen.

Miele is sponsoring and presenting an event for the World’s 50 Best Restaurants in Barcelona, Spain on the 27th June to mark the list’s 15th… 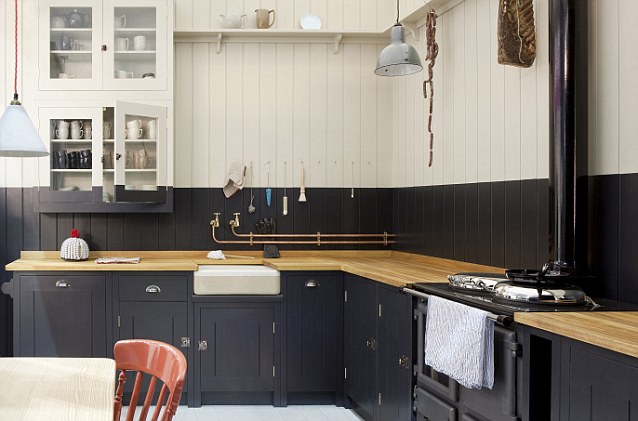 When Prince Charles collaborated with UK-based kitchen makers (and a fave of Kitchens-Kitchens) Plain English on a model house, he wanted to know: “How can…