Gorenje has received two Red Dot awards for 2018 for its WaveActive washing machine and tumble dryer, pictured, which are set to launch in the UK later this year. 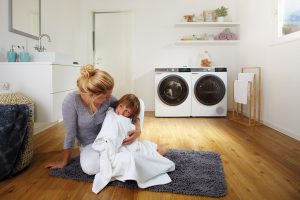 The company will receive the awards at a ceremony on the 9th July at the Aalto Theatre in Essen, Germany to an audience of around 1,200 people. According to the Gorenje, around 6,300 products were entered into the awards this year.

“Our new WaveActive models are a giant leap forward in our laundry offering and have been designed down to the very latest detail by our outstanding design team based at our headquarters in Slovenia,” said Gorenje UK product and marketing manager Richard Mackey.

“As with all Gorenje products, the designers followed our brand philosophy of ‘Life Simplified’ when developing the new models and it’s fantastic that our innovations have been recognised in the form of not only one, but two Red Dot Design awards.”

He added: “We can’t wait for our new WaveActive washers and dryers to reach the UK. We’re expecting them to be available towards the end of the summer and urge any retailers interested in stocking the new critically-acclaimed models to get in touch.”

The RedDot Product Design competition has existed since 1954. Its award, the Red Dot, is an internationally recognised quality seal. The best products receive the Red Dot: Best of the Best award from the renowned iF International Forum Design. The award, which spans multiple disciplines, has more than 5,500 entries from around 59 nations every year.

This news comes amid kbb industry talk over the upcoming Panasonic Corporation sale of its near 11% stake in Slovenian white goods manufacturer Gorenje to Chinese consumer electronics manufacturer Hisense Group.

It is thought that following news in late 2017 that Gorenje hoped to have a buyer in place by the third quarter of 2018 and that a Ljubljana-based law firm Jadek & Pensa had been appointed to deliver legal support in the process, that Panasonic saw the opportunity to offload its stake.

Gorenje said it hoped a “new partnership” would assist with the improvement of cost efficiency and help to strengthen the company.