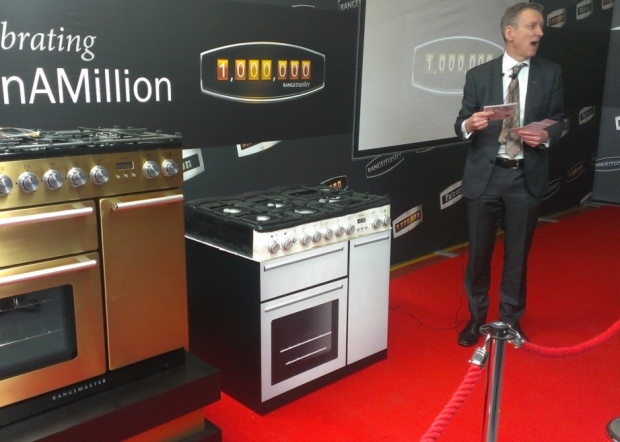 Midlands-based range cooker manufacturer Rangemaster has made its millionth model, a Nexus 90 in gold.

Employment in the factory today is 11 per cent higher than five years ago – with a team of 500, some of whom a long with an audience of local dignitaries customers, suppliers and former employees gathered to see the millionth cooker come off the line.

Selected cookers made on the same day as its millionth model will have a golden ticket which will allow consumers to win from a range of prizes. These span Rangemaster cookware, extended warranty and factory tours.

At the same time of unveiling its millionth cooker, Rangemaster also opened a training academy and showroom for its trade customers.

William McGrath, Chief Executive of the AGA Rangemaster Group commented: “Rangemaster cookers are built from experience. Experience gained since the first Kitchener was made here in 1830 by Sidney Flavel in the Eagle foundry – the same place that a new modern generation of range cookers were introduced in 1995. Rangemaster’s modern range cooker immediately captured the public imagination and has become the nation’s favourite range cooker brand. On the 4th of March, our millionth range cooker was proudly manufactured here in Leamington Spa, from where modern cooking began in 1830. Thanks a million – to our customers, our suppliers and our manufacturing team.”