There is a lot of uncertainty in the KBB sector right now and from the independents that we at Kitchens-Kitchens regularly speak to even the bubble of London has seen consumer uncertainty and delay when it comes to home improvement projects and with the outlook in the midst of Brexit offering more cause for concern Your Space Living home design and renovation studio Designer Jo Buckerfield had the following article in KBB Review.

‘The air of optimism was infectious’ Designer Jo Buckerfield gives us her impressions of the kbb Birmingham show.

I’ve been visiting the kbb exhibition for around a decade. I’ve missed a few but no single show stands out from another.

This year was completely different. 2017 was a terrible year for many in the industry. The demise of Alno and the chaos surrounding Brexit has people focused on the future. The annual NEC gathering is always a good barometer and we are looking for positive signs. In 2018, I didn’t just want to be there, I needed to be there. I’d also had a sneaky tip-off that Uform was unveiling a couple of new ranges.

According to reports, opening day attendance was down. Well, you could have fooled me. One of the worst snowstorms in years wasn’t keeping anyone away. The halls were bustling and there was an energy to the room that I don’t remember experiencing before. I sensed an air of optimism that was infectious and inspirational. My passion and my focus is on kitchen design. I wanted to see if the furniture manufacturers, old and new, were up for the challenges ahead.

Themes and stories
The overwhelming theme for me this year was drama. With all the disastrous storylines that played out in 2017, the exhibitors needed to come up with epic displays and positive narratives. Retailers like myself needed to leave the show brimming with confidence. In my opinion, they nailed it.

Following up on my tip-off, I headed to the Uform stand. It appeared that my source had been talking to everyone. The place was rammed with designers and retailers looking at all that was new. Judging by their look of excitement, they were dazzled.

I get the impression this Irish-based company has seen an opportunity in Brexit. It had obviously invested large sums in its displays, which catered for both the traditional and contemporary. The rumours of new products were true. With the brand new Belgravia in-frame, it has delivered a stunning kitchen. I know my clients will love it. In fact, my Instagram post, has already generated Belgravia design requests.

Many brands, including Uform, embraced the use of colour as an emotional tool. After years of insipid and bland, we now have exciting and exhilarating. The kitchen furniture on display was bold and beautiful. Colours that were once hidden behind the curtain of R&D were centre-stage and in full effect. Dark, brooding hues, along with industrial textures, delivered a true sense of theatre. Some were combined using tried and tested colour rules, while others were more risky and experimental. Both approaches were effective and impressive.

I felt that many of the German kitchen manufacturers came out fighting at this event. The European-based companies needed to show strength in business as well as product. They succeeded and their positive message of collaboration was clear.

I took a close look at several German kitchen brands and spoke to their representatives. They presented their furniture with efficient enthusiasm. Each of the German brands have a quality product and they know it. There was never any sense of over-selling. They let the furniture speak for itself. This requires good design and that’s what they gave us.

As a design-focused retailer, I appreciated the talent on display. Many were showing their furniture ranges against dark walls. This meant striking contrast with the lighter doors, along with subtle understatement with the on-trend darks and industrials. These darker themed exhibition stands were a significant shift from previous years.

My 2001 moment
The most impressive stand for me was by Cosentino – the engineered stone specialist. As a Premiere Elite dealer, I am biased. But my allegiance is well founded. The stand itself was epic. Quite how they built it, especially with all the weather complications, is a mystery to me. Cosentino was showing a large number of samples.

These included brand new colours and designs that have yet to be released. The samples themselves were displayed in all their glory as three-metre-high monoliths. It was like a scene from 2001 A Space Odyssey. But instead of one solitary monolith, there was a whole gang of them.

Building relationships
Beyond all the spectacle and the drama, the other reason to attend kbb Birmingham is to meet the people of influence. These are the people who can help me serve my clients and grow my business. This year, there was a lot to talk about. My lengthy conversations meant I didn’t make it to as many stands as I’d planned.

But those conversations were vital. I want to build strong relationships with my suppliers. We all need to work with positive people as we step through the Brexit transition. If I’ve learnt anything from Brexit, it’s that politicians have overestimated their power. If they fail to deliver a suitable trade deal, we will turn to our partners and solve the problem ourselves.

This industry is international to the core and my experience at kbb 2018 proved it. We need events like this to show how well UK companies collaborate.
I’ll definitely be back next time. I’m full of enthusiasm and optimism for the next 12 months. Let’s just keep the drama inside the exhibition halls and away from the high street.

From the Vale of Glamorgan, near Cardiff husband and wife team Jo and Mike Buckerfield started Your Space Living home design and renovation studio when the company Jo worked for as a designer went out of business and Jo had the desire to see the customers got their projects completed.

Working with the likes of Schuller german kitchens for its kitchen projects the Your Space Living has been in business since 2012.

Quartz and concrete in achieving the industrial aesthetic

Bathroom Brands Group has said it will be revealing “its largest showcase of new product launches to date” at the upcoming KBB Birmingham show, taking… 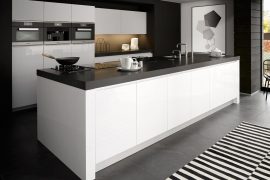 Dutch brand Keller Kitchens is set to exhibit at the upcoming KBB Birmingham show, taking place on the 4th-7th March at the NEC Birmingham. The…