AEG has achieved Which? Best Buy status for its ComfortLift dishwasher, having already received the Gold iF Design Award for the product in March this year, as well as the Red Dot ‘Best of the Best’ accolade.

The ComfortLift dishwasher has a lower-lifting rack that can be raised and locked into place. Earlier this year, Hettich won a ‘Best of the Best’ award at the Interzum Awards for its ComfortSwing lifting system, which has been used in the ComfortLift.

“Achieving such a prestigious accolade is a testament to all of the hard work that has gone into creating this innovative new product that is set to transform dishwashing,” said Electrolux UK & Ireland marketing head Chris George.

“As a company, we pride ourselves in developing highly efficient and effective technologies that are designed to make lives easier. The ComfortLift is a perfect example of how we monitor and identify consumer issues and proactively develop world-first technology to solve it.”

The new AEG ComfortLift® is the first dishwasher in the world that lets you gently slide and lift the lower basket upwards. Your gleaming dishes and cookware ascend to a convenient working height, so you shouldn’t need to bend. With a dishwasher designed around your needs, you can unload more efficiently and stack more effectively which makes life a lot easier with such an everyday appliance.

AEG markets itself as being relentless in its pursuit of always being an idea ahead in terms of innovation and this year AEG are celebrating an impressive 130 years of bringing innovation into our homes. Merging intelligent technology with responsive design by following the vision and design philosophy of AEG’s Peter Behrens – perfection in form and function.

Achieving Which? Best Buy status plus the Gold iF Design Award and a Red Dot ‘Best of the Best’ accolade is no easy task.

Alno Group up for sale 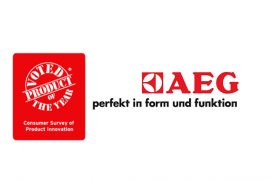 AEG wins two Product of the Year awards for 2018

AEG has taken home two Product of the Year awards for 2018 for its SteamPro multi-function sous-vide oven and its entire 9000 Laundry series, which…