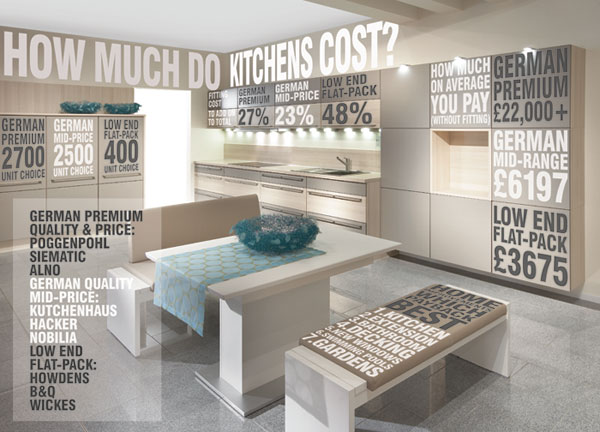 Whilst The UK domestic kitchen furniture market experienced steady growth in the 2002-2007 period, reaching a market size of £1,560m by the end of the period, nobody expected this rowth to continue during the recession as both the homemover market and new house buyer markets were effectively all but wiped out and the construction industry in despair.

Whilst the overall market value declined markedly in 2008 and 2009, before showing modest growth during 2010-12 with a slight increase of 1.9% during 2012 to reach an estimated £1,370m, it is important to note that whilst the value of the market is still not up to 2007 levels, volume sales have also declined since 2010.

Despite some substitution of high value imports with lower value products in the mid market sector the market still remains challenging and whilst the UK manufacturers have experienced ongoing setbacks, the German kitchens of Nobilia and Hacker have been leading the wave of imports and account much for the aforementioned substitution of higher value, lower volume sales.

The kitchen furniture market comprises furniture, worktops and sinks, with furniture accounting for 79% of the market in value terms, whilst worktops account for 13% and sinks for 8%.

Worktops had gradually gained market share before the recession affected the market, driven by the trend towards higher value products in this sector. However, the share has been static in the last few years, as market conditions have squeezed consumer spending power. Similarly the sinks sector has suffered from the downturn in the market.

The kitchen furniture market is at the mature stage of its product lifecycle, with replacement sales accounting for almost 80% of sales. Consumer awareness is high and purchasing decisions tend to be based on design, colour and materials. Features such as soft-closing drawers or handle-less doors, sophisticated lighting and additional electrical appliances such as televisions and coffee machines are increasing in popularity and it is this ‘innovation’ that is helping some brands capture market share over their rivals.

The decline in the new house build sector of the market has impacted adversely on companies with major interests in that sector, including Symphony and Moores, although Rixonway Kitchens Ltd, supplying the social housing sector has shown significant growth in recent years.

Imports accounted for around 9% of the kitchen furniture market (excluding worktops and sinks) in 2011, with Germany (42%) and Italy (34%) being the major sources. And with 76% of all kitchen imports being either German kitchens or Italian kitchens, its clear who the UK consumer prefers.

The distribution structure has now settled down somewhat after the sharp fall in the share held by the multiple furnishing groups, due to the closure of MFI and this was followed by the significant growth achieved by the merchant sector, as a result of the strong performance of the Howden Joinery chain, which only supplies trade customers. Howden currently dominates the market in both manufacturing and distribution terms.

The leading retailers of UK kitchen furniture at the present time are Magnet, IKEA and B & Q.

The total market for kitchen furniture is estimated to show more positive annual growth to 2017, increasing from an estimated £1,370m in 2012 to a level of £1,697m by the end of the period. Furniture will continue to account for around 79% of the total market.

MT900 by Miton, Bold or Beauty only a mother could love?